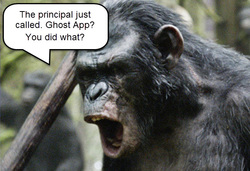 Here is an article I came across after hearing about a school system that recently made the news for having over 100 of their students involved with sexting.
As an educator and the school's Instructional Technology Coach, it hits close to home.

A massive sexting scandal involving at least 100 students at a Colorado high school is drawing attention to apps that allow kids to hide sensitive content in plain sight on their smartphones.
The students were allegedly using so-called “ghost apps” – apps that are disguised as harmless applications, like calculators, but turn into a secret photo vault – to store and trade nude photos of their peers, some as young as 13.
Those involved have since been suspended, but Fremont County District Attorney Tom LeDoux said some students could face child pornography charges that cause them to register as sex offenders.
What exactly are these ‘ghost apps’?
A search for “photo vault” apps on both Apple’s App Store and Google’s Play Store reveals dozens of listings for these types of apps.
The majority of them are disguised as simple calculator apps; however, once they are opened, users can type in a passcode that reveals a private stash of photos and videos.
Many of the apps boast “discreet icons” in their app store descriptions – some are even designed to look like Apple’s built-in calculator app. 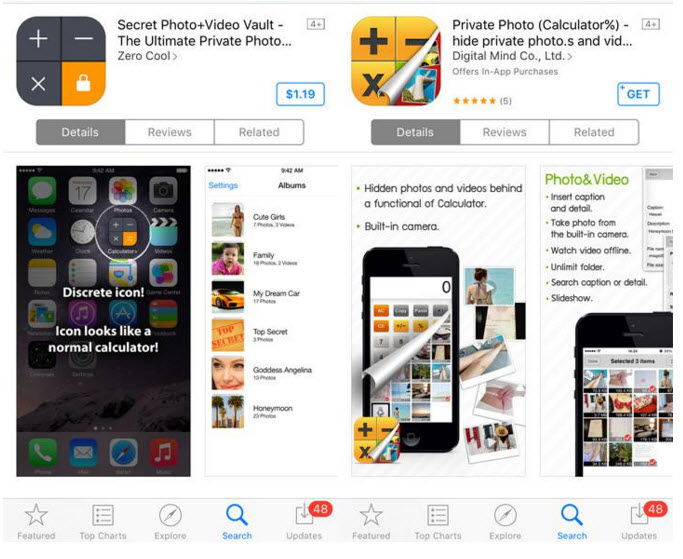 But these apps aren’t new and they are extremely popular with smartphone users. One named “Private Photo Vault” is the 28th most downloaded photo and video app in the App Store, with over 1,500 user reviews.
So what can parents do about these types of apps?
Experts urge parents to be upfront with their children about any type of surveillance they plan to do on their child’s device.
Matthew Johnson, director of education with Canadian non-for-profit MediaSmarts, said parents should avoid going through their child’s device without permission, because it can ruin the trust between parent and child.
“No matter what, tech can’t replace conversation. Kids are always going to be ahead of us – that’s why it’s so important that rather than trying to chase the latest app, we have an ongoing open conversation with them so that we make clear to them what our expectations of them are,” Johnson said.
“Make it clear that they can come to you when things go wrong.”
READ MORE: Online safety tips every parent should consider
Instead, Johnson recommended that parents use a family app store account that notifies them when their child downloads a new app and explain to them why they want to know what they are downloading.
But the digital literacy expert said cases like this one are key examples of why parents should start talking to their kids about online privacy at a young age.
“One of the most important things is helping kids understand that things that go on the Internet or are shared via smartphones can last forever and be shared with unexpected audiences,” he said.
“We need to talk to kids from very early on about the idea of consent, because the harm that’s done from sexts really comes from when those images are shared without consent.”
According to MediaSmarts research, sexts are commonly forwarded and reach a fairly wide audience once they are. Twenty-six per cent of students in Grade 8 said a sext they sent was forwarded to other people by the recipient.

Beware, These apps can be fun and useful, but could land a student in hot water:

Burn Note  –  This is a messaging app where all messages self-destruct (delete) after reading. This app only uses text messaging. Users cannot send images or videos. Teacher or parents would have no evidence that a conversation took place. This can lead to bullying or sexting or any other dangerous practice, and parents would have no idea.

After School – The description for this app in the app store says it is an anonymous and private message board for your school. This app originally launched in late 2014. But after reports of threats of school shootings on the app, it was taken down. (Burns, 2014) It was rereleased a couple of months ago with new safety features in place. (Burns, 2015) However, we are still concerned about this app since users can still post anonymously, although there is now an option to post under your real name.

Best Secret Folder – This is an iOS app that allows users to store photos secretly. The app icon is called “My Utilities” so others don’t even realize the app is on the phone.

Gallery Lock – This is similar to Best Secret Folder, but it’s for Android users. It also offers a “watchdog” feature, which will snap a photo of the user with the front facing camera after 3 failed password attempts.

Private Photo Vault - This app lets students import photos in to the albums and then hide the personal photos behind a Pin lock. This app not only gives basic password protection for personal photos but also includes a decoy password and break in report. This app takes secret photo of the person who tries to enter the app and it also log the GPS location to let you know who tried to get access to your personal photos. Decoy password let you set password which launches various set of photos.

KYMS - When a person download KYMS then its icon is disguised as calculator on your phone. Completely functional calculator appears at the launch of an app and it demands 4 digit PIN number and the equal sign after which you can access an app. This app allows you to hide PDFs, word documents, excel spreadsheets and PPTs along with photos.

Tinder is a photo and messaging dating app for browsing pictures of potential matches within a certain-mile radius of the user's location.
What parents need to know

Yik Yak is a free social-networking app that lets users post brief, Twitter-like comments to the 500 geographically nearest Yik Yak users. Kids can find out opinions, secrets, rumors, and more. Plus, they'll get the bonus thrill of knowing all these have come from a 1.5-mile radius (maybe even from the kids at the desks in front of them!).  ​
Proudly powered by Weebly